We Can't Let Them Get Away With It

Whenever there's a discussion about 'inclusion' or 'reasonable adjustments' in education, a cry of "It's not fair!" will surely follow, like an echo of the playground refrains of our childhoods.

"We can't let them get away with it!"

If we make exceptions for one child, the argument goes, then the other children will think the rules don't matter. It will be a free-for-all. Anarchy will surely ensue. 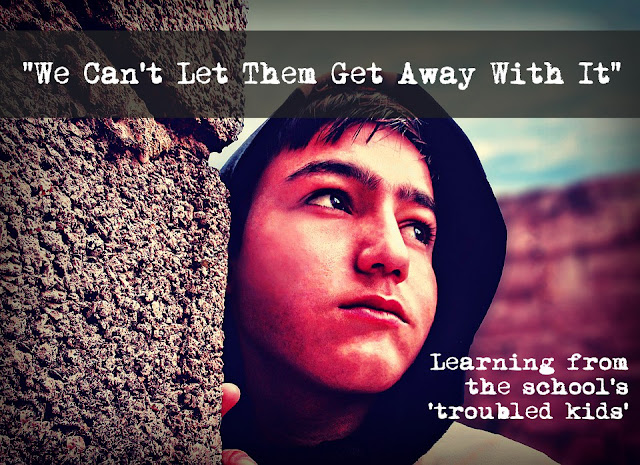 Every single time I hear or read those sentiments, I think of Daniel Barrett*. I went to primary and secondary school with Daniel Barrett, and he became a notorious kid.

Truth be told, I was a little bit scared of Daniel Barrett. I remember one day in the lunch queue when he ran amok with an elastic band, flicking it on our faces, leaving red and white welts raised on our cheeks. I remember the sting of the rubber on my face, as well as the sting of shame that I, like all the other seven year olds, was afraid to raise my hand and alert the distant lunchtime supervisor.

Later, in our final year of primary school, there was an altercation between Daniel Barrett and the head teacher. Our huge classroom was a screened off area of the main hall, right next to the head's office. We heard the shouting in the office before it spilled out into the hall, just a flimsy screen away from our desks. Then we heard the running feet as Daniel Barrett bolted, the head teacher's shouted reprimands uselessly fading away.

You might think we shouldn't have had to put up with all of that. You might be right. But we did all put up with it for one simple reason: Daniel Barrett's mum had died.

We were just little kids. We didn't know about psychology or trauma or grief or any of it. But we understood deep in our souls the unfathomable enormity of being left without a mum. We weren't exactly a supportive community for him; we shunned him in the playground, half fascinated and half afraid. Yet whenever something notorious happened, we all understood in our childish way that it was all rooted in his terrible loss, and so we forgave, forgot and moved on. The rules were different for Daniel Barrett and we all just accepted that.

In the larger community of secondary school, Daniel Barrett became just someone I occasionally saw around the place. We didn't have any classes together, so my experience of his notoriety was limited to gossip and shared tween drama.

Then, in our third year, tragedy struck our school. A girl in our year suddenly collapsed on the playing fields and died later that day. We were all shell-shocked. The PE teacher took early retirement at the end of the year and we all assumed it was because of that awful day.

Immediately after her death, Daniel Barrett disappeared from school for some time. The dead student had been his girlfriend. We talked about it in corridors, during lessons, at lunchtime. He had become used to spending hours at his girlfriend's house. Her mum had become like a second mum to him. We understood the enormity of it, the layers of damage upon damage.

He did return to school. He was troubled, we could all see. He was also trouble. Eventually he punched the deputy head in the face and knocked him to the ground. This was the end of the road for him. He was expelled and I never saw him again.

We discussed all of this among ourselves. We all agreed that exclusion was the only option really. Mr Gibson didn't come to work that day to be physically assaulted. We knew that shouldn't happen. Yet we also all agreed that it was a terrible shame; that Daniel Barrett, notorious though he was, had fought through pain that none of us had known.

We need to give kids some credit when we're discussing how schools should handle those whose behaviour has been launched on a dangerous trajectory by neglect, trauma, grief, loss or adulthood come too early. Did Daniel Barrett disrupt our education? Not really, in the long run. Did we sometimes fear him? Yes, honestly we did. Did we understand why the rules were different for him than for the rest of us? Absolutely we did. We understood and we accepted it.

When faced with people whose experiences are very different from our own, whose actions and behaviour seem confusing and even concerning, we can choose to withdraw and protect ourselves at all costs, or we can be cautiously curious. In the generally safe environment of a school, with plenty of adult support, I believe children can learn enormous life lessons from even the most difficult and challenging members of their communities.

From Daniel Barrett, I learned that an elastic band snapped against the face can really sting. I also learned that justice must always, always be tempered with mercy; a lesson that many who lead our schools would do well to attend to.

* not his real name, obviously!