I hadn't intended to blog today. My NAW17 posts were planned for a 'working week' only! But today has been such an amalgam of all things adoption that I couldn't leave it. 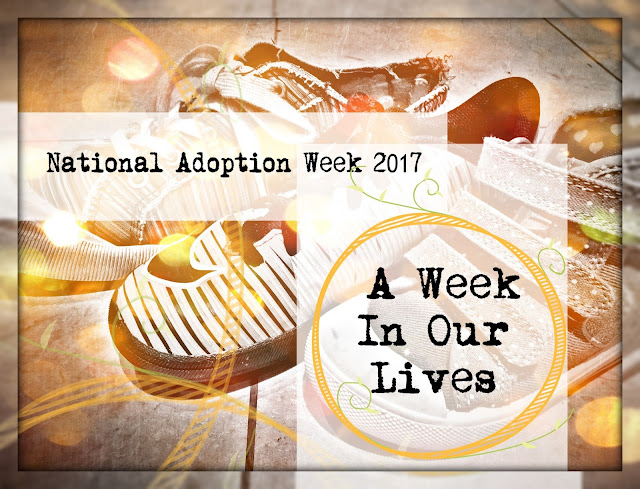 Elton John sang enthusiastically about 'The Circle of Life' as Rafiki held up baby Simba in The Lion King. It's a memorable image. In adoption, the circle of life can look rather like a drunk spider drew it with a pen in each hand (foot?).

Today we were invited to the Christening of the little sister of adorable Baby Girl who I fostered several years ago now. It was our second visit to that particular Catholic church; we had been to BG's Christening there almost exactly two years ago.

I sat and watched the kids running around the dance floor after the ceremony. They were kicking balloons, squealing and laughing and high on sweets and freedom. Baby Girl was amongst them, although most definitely not a baby. Her fine, barely-there hair is now long and thick and her face and form are now definitely that of a little girl, not a baby or even a toddler.

She came over to us, and her daddy showed some her some photos of her as a baby with me and OB. I flicked through my phone. I still had photos too. She stared at them with her enormous eyes, pointing shyly at me when her dad asked her who was in the photo.

I don't think I have ever felt more like a person with a foot in two worlds as I did today, watching those two sisters, so similar to each other, and so settled with their mummy and daddy. The memory of picking BG up from the hospital, of taking her from the arms of her first mummy, came flooding in, remarkably detailed and visceral. Only a few people in the world hold a memory of that crucial, heart-breaking, part of BG's life story. I am awed and privileged to be among them.

To say that BG had a less than optimal start to life would be a colossal understatement. Her future looked extremely insecure and, of course, we still don't fully know what it will hold. But it is no exaggeration to say that, after all we went through in her early months, when I watched her running round today, playing, laughing, eating; when she came over to me and actually talked to me; when she asked me to help her open something . . . it felt like a miracle.

Less than two hours after arriving home, we were in the car again, on the way to pick up another little one whose circle of life is already complicated beyond belief.

So this evening, I have three children asleep in my home. Three more families now somehow forever linked to mine, even if only in memories. One of them will one day find a new family and that wobbly doodle of life will take another sideways turn.

Let the spider keep drawing. I've seen it from all sides now and I know it can be inconceivably messy. And yet somehow, there's something incredibly compelling about the doodle.
Email Post
Labels: adoption Fostering Life National Adoption Week