Sensory Processing: After the Assessment

When I met for the first time with our post-adoption social worker, sensory processing was one of the first things she mentioned. In fact she felt it was so important to assess OB's ability to process sensory information that she made a referral to a specialist occupational therapist immediately, believing that other therapy would be futile unless we knew where we stood with this area.

Sensory processing is a term that refers to a person's ability to process the sensory information coming from the world around them in an organised manner. Sensory information can come through the well-known '5 senses' - touch, taste, smell, vision, hearing - and also through the less well-known senses such as proprioception (awareness of the relative position of parts of the body) and vestibular (awareness of the body's movement in space - balance, position etc.).

Most people have probably heard of sensory processing issues in relation to people with autistic spectrum disorders - being overwhelmed by noises, or by the feel of certain fabrics against the skin. Many children who have experienced early neglect and trauma also seem to experience sensory processing problems. The Attachment Trauma Network suggests that this may be related to the problems with the attachment cycle in infancy and early childhood. 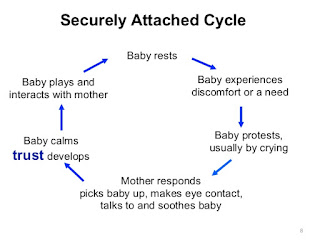 Ideally, a child's primary caregiver acts to regulate the child in part through experiences such as rocking, stroking, singing and talking. A child who experiences neglect does not learn to regulate themselves and misses out on all of this predictable, regulating sensory input at the time when their brain ought to be developing the ability to process it. In fact, they may instead be exposed to unpredictable, frightening sensory input (e.g. shouting, prolonged hunger, rough handling) with nobody to help them make sense of it all.

OB's assessment threw up a few things. Firstly, that his core strength is poor. This has a number of implications for him, but I'll save that for another blog. Secondly is that he has sensory difficulties in every area of sensory perception, but some more than others. In particular, he is hyper-sensitive to auditory, vestibular and tactile sensations, but hypo-sensitive to proprioceptive input.

What does this mean? It means that while he is content to make a lot of noise of his own, partly to regulate himself, he isn't too keen on everybody else's noise, or sudden or loud noises. While he will enjoy a hug or a cuddle, he is too ticklish for many basic grooming activities, and isn't terribly keen on any touch that isn't on his terms. The OT actually suggested that our bathing problems might be down to the feeling of water (always tepid - hot/cold sensations are an issue too) running over his skin being unbearable to him. It means that predictable movement like swinging is lovely, but expecting him to cycle on a bumpy pavement will lead to meltdown. It means that he runs too much, skips too much, stiffens up randomly like a puppet when doing physical activity, pushes against things, crashes into things and always, always leans against me just that little bit too hard.

So, what do we do? OB will have a course of sensory therapy. We are waiting for this to start so I can't enlighten anybody as to what it might entail! He has also been prescribed a 'sensory diet'. This is a list of things to try at home that might help to give him the sensory input he craves in some areas, while modulating the overwhelming sensory input in others.

Although every child's 'sensory diet' is different, there are some common themes, and much of what is suggested on OB's are things I've noticed other parents talking about. Many of OB's recommendations are around providing him with the sensation of pressure on his body that he is seeking when he throws himself onto the sofa, or onto me, so carrying a weighted backpack, having a weighted lap bag on his knee while he sits at the table, using a weighted blanket, daily deep pressure massage of his fingers and hands. Others include considering the use of ear defenders, avoiding walking on bumpy and uneven surfaces and making the most of sensory input in everyday activities, such as using different textured sponges in the bath, and encouraging him to dry himself after the bath.

So far, so good. Now all I have to do is to persuade him to co-operate with any of these suggestions!
Email Post
Labels: adoption Attachment Babies Child Development Sensory Triggers