After the Adoption Order - The Medical Stuff 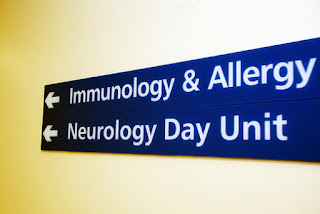 Last month we had an appointment at Manchester Children's Hospital to see the Immunologist again about Birdy's allergies. It took us about an hour to drive there, through what seems like a perpetual rush hour these days, and more time to find a place to park, and then a very cold walk across campus to the right building. On arrival, I tried to check us in on the automatic machine in the foyer, but it didn't work.

This was my first inkling that something was wrong.

As we made our way to out-patients reception to try to check in again, I wondered about the confirmation of appointment letter I had tried and failed to find that morning. Had I actually been sent one? I had made the appointment using the choose and book website but, come to think of it, had I actually heard from the hospital?

We queued up for quite a while. Our appointment time came and went. Finally we got to the front of the queue and it was confirmed - there was no appointment.

There had been. The hospital had received the referral from the GP and written to me inviting me to choose and book. But then the hospital had got confused. The GP's letter said that Birdy had been seen at that clinic before. The hospital checked their records. No record of Birdy. So they wrote back to the GP suggesting she had made an error and cancelled the appointment. Nobody had thought to tell me.

I was not surprised, because I had predicted it. Birdy's first appointment at the hospital had been a year ago, in her old name, using her old NHS number. When a child is adopted, they receive a new NHS number and new records are started. It's a blank slate. It takes time for this new number to be issued, and time for the GP to make summaries of old records and append them to the new ones. So for a while, there is a limbo land.

It was during this limbo land time that I approached the GP for the referral. Prior to that appointment, I called the hospital immunology department myself, explained Birdy's situation and told them to expect the referral. I knew from the tone of voice of the person I spoke to that she didn't really grasp the significance of what I was trying to tell her. When I saw the GP, I explained it all to her very carefully. At that point Birdy was going under a new name but didn't have her new number.

Somewhere between that GP appointment and the referral being made, Birdy switched over to her new number. The referral obviously went off to the hospital with the new information and the confusion was complete.

Thankfully they still saw us, we got our allergy testing and added sesame to our list of foods to avoid. And if that was the end of it, I'd be happy. But, of course, it isn't.

Birdy has a moderately lengthy medical history. She has been seen by the GP, the asthma specialist nurse, the eczema specialist nurse and two different hospitals. At various times she has had prescriptions from all of these people. Most of these prescriptions need to be put on repeat, yet it has taken me repeated requests for each medicine to actually make that happen.

When her records switched over, it apparently threw all that for a loop again. I asked for a printout of her complete prescription list this week and three items were missing from it. One of these was her anti-histamine medication that we have to carry everywhere with us. The others were eczema creams. The receptionist said there was no record of her ever having been prescribed these things, despite the fact that they issued a repeat prescription on the anti-histamine at the end of last year. I now have to go back to the eczema clinic and the hospital and get some proof so that the GP will put them on repeat.

This is something that adoptive parents need to prepare themselves for. At no time, during the adoption process of either child was this explained to me. It didn't matter for OB as he had virtually no medical history anyway and the GP's surgery we were with then seemed to manage it fairly seamlessly.

Birdy is a different matter though. For various reasons, it's important that an accurate medical history is carried through. For instance, the immunology consultant plans to call her into hospital when she is around four years old to do a supervised peanut challenge. This won't happen if she's disappeared off the system!

And we can't assume that everybody involved understands the procedure either. When I called my GP's surgery to tell them she'd been legally adopted and ask about procedure, the receptionist I spoke to offered to just change her name on the system. Let's be clear, that would link her new name (changed for security reasons!) to her old NHS number allowing anybody that can search that database to find her new name in a moment just from looking up her old NHS number - a number that her birth mum undoubtedly has a record of.

At least I know Birdy's medical history though! For people adopting a child who may be four or five years old, with a lengthy and now inaccessible medical history, this must be a minefield. Yes, it's been a bit of a slog for us, but six months down the line and it's mostly sorted out now - apart from those pesky repeat prescriptions!
Email Post
Labels: adoption Allergies Asthma Eczema Health NHS