Interrogation in the Supermarket 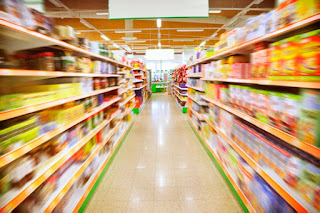 Years ago, back when I lived a carefree, non-parent life, I used to go about my days relatively unmolested. I could walk down the street and nobody would pay me any attention. I could spend as long as I liked (preferably not too long!) in the supermarket and nobody would speak to me. I quite liked it.

As soon as OB came into my life, all that changed. Having a gorgeous, wide-eyed, cheeky-looking toddler in the trolley seat apparently attracts all kinds of attention. There were comments about his cuteness - I appreciated all of those! - and questions. Lots and lots of questions. What's his name? How old is he? And, as he got older, does he go to nursery? To school? (He's very tall!) To be fair, these were far more innocuous than the questions I got asked at the Sure Start Centre tots group, which often centred around unpleasant-sounding birthing experiences.

All of that was fine, though. OB was (and is) fabulous and I never minded answering questions about him or accepting compliments on his behalf.

Since I've had other children alongside OB though, I've noticed a major shift. I don't get asked questions any more. Suddenly, I'm invisible, and all the questions about the babies and toddlers are directed at OB.

Is this your sister?
What's her name?
Is she good?
Does she cry at night?
Does she share your toys?

And so on and so on. Poor OB. It's torture for him. Firstly, the answers to some of those questions are not always so straightforward. Is this your sister? Or brother? Until a few months ago, none of the children that have accompanied us to the supermarket have been OB's sisters or brothers. I used to step in to save his awkwardness but, to be honest, I would struggle to answer the question too. Do I lie? Or do I tell the truth and say "No" - an answer that really feels as though it requires further clarification that I'm not sure I want to give to the stranger in the supermarket.

Secondly, OB is shy around strangers. Actually, he's shy around people he knows. When we go to his best friend's house it takes him a while to work himself up to taking off his coat. He has a hard time answering people's questions. It puts him under pressure. If a stranger even asks him what his name is, he practically turns himself inside out. A supermarket interrogation is the last thing he needs.

And for some reason, so many of these curious strangers seem to take his non-response as a personal challenge. They keep going, determined to drag some answers out of him. I assume they're trying to show him they're friendly and establish some sort of connection but the longer it goes on, the more gnarled up OB gets. If he does answer, it's barely audible, which the interrogator takes as a signal to get him to repeat his answer over and over again, resulting in five more whispers and then one strangled shout. Cue the interrogator backing off in alarm.

So do I intervene and answer for him, thus giving everyone the impression that I'm an overbearing mother and that's why he's so shy? Or do I explain that he's shy and risk shaming him? Or do I just stand there and let it happen, hoping he'll 'toughen up'? (Hint: it won't be the last option!)