There's quite a large age gap between me and my sister. It doesn't matter now, of course, when we are both rushing madly towards middle age (one of us six years nearer than the other of course!), but when we were children, well, six years was a long time.

So I had thought to myself that maybe when I had children, I'd try to have them a bit closer together. I imagined that with, say, a two-year age gap, they'd have interests and friends in common, play together without one having to come years down to the other's level, go to the same birthday parties and kids clubs. I thought that would be nice.

When you adopt your children, it's not so straightforward. If you adopt a sibling group, you get what you're given in terms of age gaps. I know adopters who have children less than a year apart in age. And if, as I did, you adopt two completely separate children at different times, the agency is likely to insist on a minimum age gap - in our case, at least two years.

Having experienced a few different combinations of children over the last six years, I can see why. Having toddler boys nine months apart in age was a lot of fun, and yes, they did play together and were very close, but basically it was exhausting for me, and there was a lot of screaming and fighting too.

Later, with a 5-year-old, a 3-year-old and a baby, I saw a different dynamic. The two older children were in competition the whole time. Any idea I had previously held that having children with similar interests would be lovely quickly went out of the window. For these two, similar interests meant similar needs, and therefore intense competition to have these needs fulfilled. Twinkle and OB never gelled at all. It was such hard work that, despite copious amounts of comfort eating, I actually lost weight.

This experience confirmed to me that I needed a decent-sized age gap between OB and any sibling. I began to understand that it was vital that other children living in our home had different needs from his. OB has never minded when I have taken time out to, say, feed a baby, but if I had to help Twinkle on the toilet I could bet my bottom dollar that he'd have a sudden urgent need for the toilet too - and vice versa. I can do things for other children, as long as they're not the same things that I'd be doing for OB. 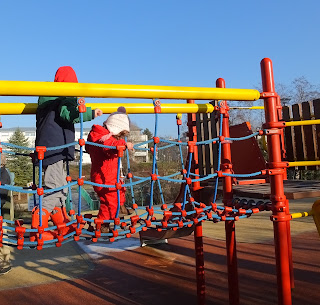 Birdy and OB are just about exactly four years apart. Is it the perfect age gap? I don't know, but it really works for us. I had worried that the difference in age would be too much, that they would never play together and miss out on shared experiences. So far I am glad to have been proved wrong. Now that Birdy is fully ambulatory and into everything, they play together a surprising amount. As she still has a nap every afternoon, I can get some quality OB time in there too.

But more than that, Birdy's adventurous character has been a real boost to OB's more timid nature. She will have a go at anything, and OB finds it easier to pluck up the courage to attempt new things if he's 'helping' her or just 'going with' her. Last time we went to CentreParcs, OB was ready to throw himself down the water slides as long as he was 'just helping' Birdy. In previous years it's taken hours of patient work to get him to even try them.

Birdy has brought out a truly caring and compassionate side to OB's character too. He knows all the food she is allergic to, and looks on cafe menus for things she is safe to eat. He looks out for her, calling me if she is hurt. He is so willing to get on her level to play silly games that have them both roaring with laughter. I couldn't ask for more.

As for Birdy, well, she looks up to her older brother, seeks him out when she doesn't know where he is, and cries for him when he is not there. She copies everything he does (sometimes I wish she didn't!) and tries so hard to play his games. Today they were building marble runs together. She was thrilled with the run that OB made for her, and he was relatively calm when she later trashed it!

It's not prescriptive, I know. My children are not birth siblings, so they don't carry shared baggage from their early experiences, which helps us. Every family set up is different. Every child is different. But I think that, although I would never have planned it this way, our four-year age gap is working out just perfect for us.
Email Post
Labels: adoption Family Home Life parenting Siblings